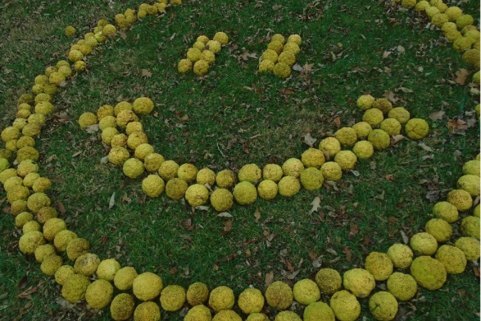 Feature photo: The arranged fruits of the Osage Orange tree into a happy face caught my attention and consequently initiated my interest to write this article. 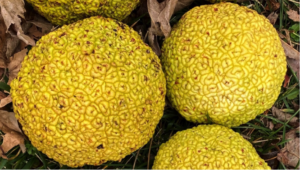 Osage Orange has a tough “stomp-proof” fruit that will not be crushed with foot pressure. It is grapefruit sized, about 4 inches in diameter, with an outer surface that looks like “brains.”

In December 2021, while on a trail review for the Birdability website (https://www.birdability.org/), I came across a most unusual tree. I had traveled throughout the US and the World, and walked many trails in Fairfax County, but never have I seen this type of tree. It’s commonly called an Osage Orange tree, but also goes by many other names, including its scientific name Maclura pomifera. As I approached it, I saw grapefruit sized yellow fruits on the ground beneath it, with a pile of them arrange in a happy face configuration, as if beckoning me toward them. I looked at those fruits in greater detail, and I thought to myself that the exotic fruit looked like brains, because of the convoluted nature of it. 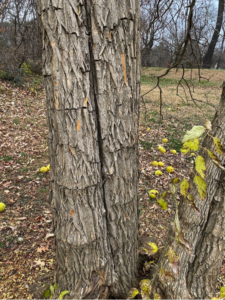 The bark of the tree has scaly ridges with irregular furrows.

I asked a passer-by if he knew what kind of tree it was. He told me it was a “Monkey Tree,” so that became the basis of my internet search. Indeed, the fruits are also known as “Monkey balls” and “Monkey brains.” The Osage Orange tree is originally native to parts of Texas and Oklahoma. Today the tree has spread to much of the United States and Canada. Male and female trees have different flowers. Only the female tree bears fruit, but it is not edible. The early settlers of America had many uses for this tree and a lot of information on the tree and it uses can be found on the internet. The bark pattern on the tree has a characteristic deeply furrowed, scaly nature. Its twigs have thorns.

Fort Ward is a pleasant place to have a walk, with many ADA amenities. It also has a small museum on its grounds. 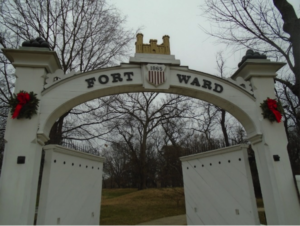 The location of the Osage Orange tree is just beyond the historic gate. Notice the Corp of Engineer’s insignia logo (castle) on top of the gate.

“How do Birds get their Colors?” webinar with Ivan Phillipsen, July 14t...