Sometimes improving wildlife habitat does not require a task as involved or intense as, for example, a full day pulling invasive plants. Sometimes an act of kindness followed by a few well-targeted emails can make a difference to wildlife. It’s about caring enough to get involved. And so it happened like this … 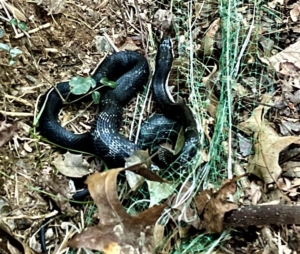 Last August, as FMN Barbara Saffir was hiking at Burke Lake, she encountered a roughly 4-foot-long Eastern Ratsnake entangled in netting. The netting had been used to stabilize dirt along trail sides during an extensive trail maintenance project that was completed months before.  This common, nonvenomous snake could hardly move and quite obviously could not free itself. That netting had been a tripping hazard for hikers, runners, and especially little children since the repaving project completed and now an entrapment to wildlife. 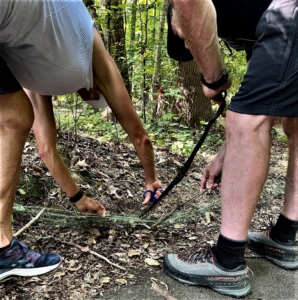 Along came hikers Julia and Joe Higgins and Barbara asked if they could help. Providentially, they were very willing to help, very knowledgeable about handling snakes, and they had scissors. They skillfully rescued the snake by holding the snake with their hands and controlling the head with a stick, while tediously and carefully cutting the net to release the snake from its bonds. 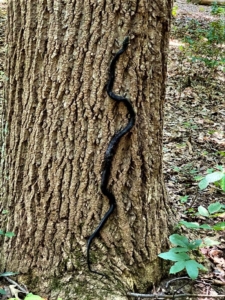 Fortunately after the snake was freed, it was able to slowly slither away and climb up a big tree, stressed but apparently no worse for wear. Barbara later joked, “I’m pretty sure it had a smile on its face when it hissed, ‘Thank you, humans!’”

After the release, Barbara decided to email Fairfax County Park Authority (FCPA) officials whom she thought could help provide a solution to prevent future wildlife entrapments due to this type of netting, and FMN’s Janet Quinn.  Janet forwarded her email to Tammy Schwab (FMN volunteer and FCPA employee), who provided additional key contacts. To their credit FCPA promptly responded to the emails and quickly directed development of a corrective action plan that would remove the netting. They also suggested policy changes to mandate alternatives to this netting in the future and recommended that their contractors make a concerted effort to discontinued use of this material until the mandate.

Keith O’Conner, Park Manager at Burke Lake Park replied in his email, “The project was laying asphalt on a portion of the trail and a contractor did use the netting.  Efforts to remove the material on a small scale have been challenging, due to coverage by natural material.  As we both know snakes are low to the ground and are slipping under the natural material and finding the netting.  We are formulating a plan now for a larger more effective removal of all of the netting along that project.”

Kevin Rudd with FCPA Park Operations, thanked Barbara for reaching out and said, “Our team will be out to look into how we can make this project critter friendly at Burke Lake.”

We should be encouraged by these positive actions and outcomes. It shows that even a small team, such as the three wildlife stewards that helped the snake, can make a difference. It is also a positive indicator that FCPA cares deeply for their parks, they can be responsive to public issues, and they can quickly initiate corrective action to ensure the continued safety of human visitors and wildlife residents alike. Thank you to FCPA for all they do to maintain such a wonderful park system!

In this case the animal was rescued by skilled wildlife heroes who happened to be there and were able to jump right in. However, if you encounter an injured animal or one in a precarious situation and cannot safely take corrective action yourself, help may be available at: