Feature photo:  Last summer the monarda bloomed beautifully! At the top you can see the beginnings of the asclepias incarnata (the mauve colored flower cluster).

This story begins at the very end of the summer of 2019. I have a fairly small back yard with a patio and around the patio is a garden area that I was using for growing tomatoes.  Well, frankly, 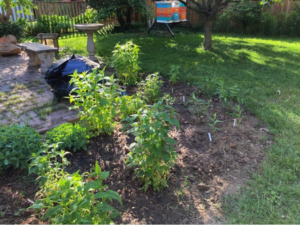 Spring 2020. This is the garden the following year after the initial plantings which went in at the very end of summer 2019. There is also a sedum (far left) that was already there. This plant is over 100 years old. Literally. It came from my great-grandmother’s garden.

that was just wishful thinking.  The plants got tall and beautiful but every tomato but about five got either eaten by something or split and turned to mush with the rains we had that summer.  It was very disheartening.  I knew I would have to scrap the tomato dream.  So I decided to cut my losses around the middle of August and took them out.  That left an “L” shaped area around two thirds of the patio with nothing.  The area is about 3 to 4 feet wide (from the patio) and the length is about 8 feet on one side and about 6 feet on the other.
I thought much about what I could put there.  I already have lots of coneflowers, culver’s root, agastache, zinnias and rudbeckia.  I just wanted something different….

Then I remembered reading about an insectary garden and found that idea very intriguing.  This would be the perfect area for it!  It is in full sun and just about the right size.  The next big

decision was what to put in it. That spring, along my back fence, I had already put in a long row of mountain mint, a combination of pycnanthemum muticum, p. virginianum and p. tenuifolium that smells heavenly and attracts an incredible variety of insects.  So I didn’t need more of that.  Rather than do copious amounts of research I went directly to the best source of all: the FMN group.  I knew there had to already be native plants that others could recommend for such an enterprise.  And I wasn’t disappointed. 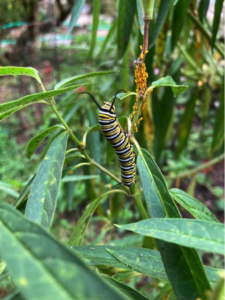 I received a wonderful variety of suggestions and studied information on each one.  I decided that since the area was not very large, it would be best to stick with just a few selections and to plant them en masse.  I looked at the seasonal blooming times and tried to get plants that would bloom most of the Summer and into Fall.  My overall idea was to have some brightly colored plants that would bloom throughout the season for pollinators and other wildlife. My colors are mauve, yellow and scarlet. I chose Asclepias incarnata, Asclepias  purpurascens, zizia aurea and monarda didyma.  Unfortunately, it was already very late in the season so I could only put in a few plantings before the cooler weather started coming in. I put in the milkweed and a few monarda, figuring I would put the rest in the following spring.

This is now the second full summer of my garden. The asclepias incarnata went gangbusters last year! The purpurescens has not done well but is coming up this year 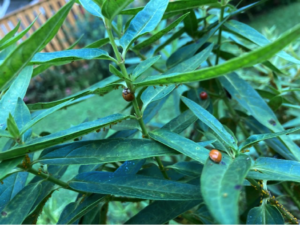 Various ladybug species on the milkweed (and aphids in lower right).

and looks a bit more robust. Somehow, lobelia got into the garden (I had some lobelia cardinalis in another place and I think the birds must have distributed the seeds) so these also made a wonderful surprise appearance. They are coming up again this year and I planted more seeds for them as well.

Last year I noted many different kinds of bees and other flying insects, ladybugs (as well as aphids which I left for the ladybugs), lacewing eggs and monarch caterpillars on the milkweed. Hummingbirds loved the cardinal flowers and the bee balm as well. I harvested the milkweed pods in the Fall and gave to people to create their own insectary gardens. 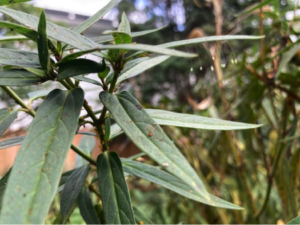 The garden is now coming alive again as the spring unfolds. The milkweed is almost a foot tall and the bee balm is spreading. The golden alexanders are in bloom, and I watch tiny bees climb all over the bright yellow flowers. I am so glad I have planted this garden!