Whether you are new to native plants and what they can do for your property or you are looking for alternative landscaping ideas, this event is for you! Native plants can: 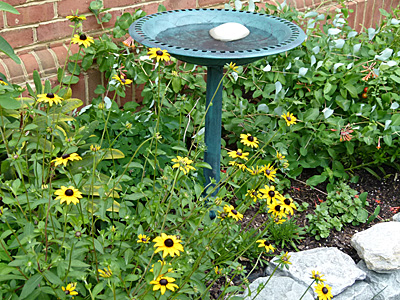 The flower patch is abuzz with pollinators but also predators looking for a meal. Learn about the good guys vs. the bad guys with “wolves in sheep’s clothing,” camouflaged “crabs,” and zombie bees. You will never look at your flowers the same way after visiting this “Serengeti” in miniature. This talk is co-sponsored by Loudoun Wildlife Conservancy and the Loudoun County Public Library.

If you love birds, help them by growing native plants in your yard. Birds cannot live on birdseed alone, but also need to eat native insects – which need native plants for food and shelter.

Join Audubon Society of Northern Virginia for a presentation by Sam Hoadley from the Mt. Cuba Center, a nonprofit dedicated to preservation and conservation of native plant species of the Piedmont ecoregion. Sam will take us on a deep dive into Mt. Cuba Center’s newly released Hydrangea arborescens evaluation results. After just completing a five year trial, the results are in on which Hydrangea species received top marks from a garden perspective and which species and cultivars tallied the most pollinator visits. Included will be tips for successful cultivation and care of wild hydrangea in your home landscape, and where you can purchase plants to get started.

Sam Hoadley is the Manager of Horticultural Research at Mt. Cuba Center where he evaluates native plant species, old and new cultivars, and hybrids in the Trial Garden. Sam earned his degree in Sustainable Landscape Horticulture from the University of Vermont.

Most insects have a positive impact in our landscapes. Native plants can be selected to attract specific bees and beneficial insects including predatory and parasitic wasps, beetles, flies, true bugs, and lacewings. Learn about the predator-prey relationships of these flower-visiting beneficial insects and how they help keep problem insect populations in balance. The life cycles, diversity, and nesting habitat of native bees will also be covered along with examples of native plants for different site conditions.

The program will be presented by Heather Holm, biologist, pollinator conservationist, and award-winning author.

This is a joint venture with Audubon Society of Northern Virginia and the American Horticultural Society. 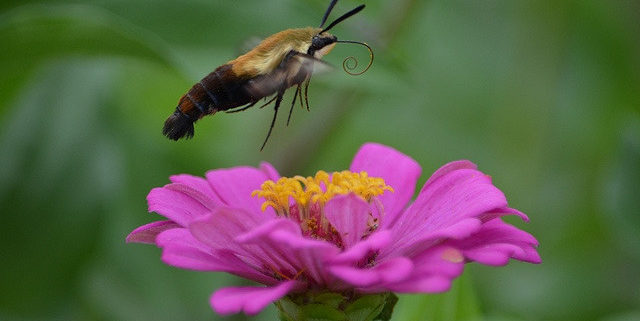 Join industry experts as they tackle the native vs. non-native plant debate: Is a native plant-only prescription necessary? Under what conditions should non-native plants be incorporated, and what are the risks of using cultivars? Join the conversation as experts assess the scope of environmental benefits that native ecosystems create, such as decreasing pollution and fighting climate change.

About GreenScapes
The GreenScapes Symposium, formerly Green Matters, is an annual program sponsored by Brookside Gardens since 2004. The symposium will continue to concentrate attention on the intersection of horticulture and environmental issues Environmental stewardship is a core value of the Maryland-National Capital Park and Planning Commission (M-NCPPC), Brookside Gardens’ parent organization. As such, we strive to provide timely information and viable solutions to environmental challenges.

Join Landscape Designer Barbara Ryan as she addresses questions about creating a good design for a pollinator landscape. Submit your questions on the registration page, and please send photos of the area in question to [email protected]. This videoconference will be recorded and posted to YouTube. 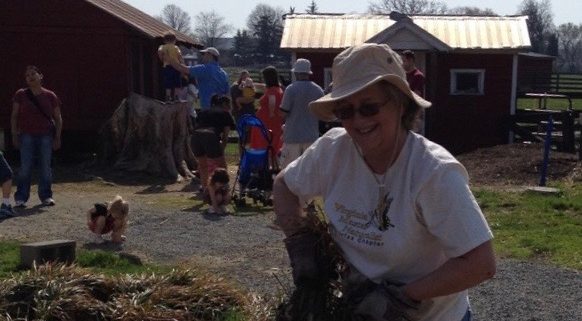 In 2011, Frying Pan Park did not have a pollinator garden.

By October 2012, they did, and Fairfax Master Naturalist volunteers are the reason. Here’s the story.

Frying Pan has a long history, and hosts thousands of visitors each year, many of whom are the future stewards of our environment: young children. My own children had participated for years in summer camps at Frying Pan, learning about farm life and farm animals, making butter, playing outdoors.

In July of 2012, Ashley Stanton, then service project chair for FMN, put out a call for the development of a pollinator garden, as a “thank you” to Frying Pan for hosting our annual meeting.

Sarah Mayhew, FMN Class of ‘07, pulled together a team of people from Frying Pan Park, the Fairfax chapter of the Virginia Master Naturalist program, and representatives of the Virginia Native Plant Society (Potowmack Chapter) and Earth Sangha. Without her strong leadership, this project could not have happened. Carmen Bishop, FMN ’07, served tirelessly as liaison to the park.

A site was chosen near the historic farmhouse: the location wraps around the south and east sides of the park’s Dairy House, where a neglected garden, created by a Girl Scout troop about ten years back, was in need of a major retrofit.

With lots of input from Carmen, Sarah, Cindy Morrow, Amol Kaikini, Terrence Liercke, Alan Ford, and Lisa Bright from Earth Sangha, I designed the pollinator garden in August 2012. By September, garden preparation was complete, and plants were donated by many FMN’ers, and by VNPS Potowmack and Earth Sangha.

Why did VNPS and Earth Sangha choose to become involved? Expanding our understanding of the value of native plants, and putting those plants into the hands of Virginia homeowners, schools, and businesses, are key elements of the missions of these two organizations. Personal connections matter, too: for example, then-VNPS Potowmack President Alan Ford is a Fairfax Master Naturalist, and these personal connections brought volunteers and donations of plants to the garden.

Two planting days were all it took to get the garden established. The garden includes many plants important to bees, butterflies, and other pollinating insects, including goldenrods, bee balm, and milkweed.

It’s one thing to get a garden started; the real challenge is keeping it going. Since 2012, I have donated over 275 hours of time caring for this garden, with help from the park (big thanks to Patrick McNamara and Marge Landis) and from FMN members. Cindy Morrow and Cynde Sears have been exceptionally helpful.

The scope has expanded from the original Dairy House planting to maintenance and expansion of the herb garden around the Smoke House adjacent to the Dairy House.

The herb garden was already a real magnet for pollinators of all sorts:  bees, butterflies, flies, wasps, and more. It was already home to a substantial stand of our native mountain mint. Adding more native plants with culinary uses was an obvious addition to our mission at Frying Pan, and Girl Scout Rachel O, along with her sponsor Kay Fowler, added many of these plants in 2016.

The garden has filled in well since it was first planted: 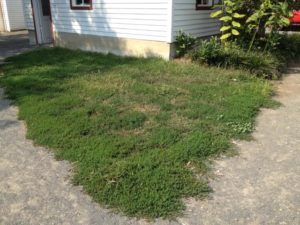 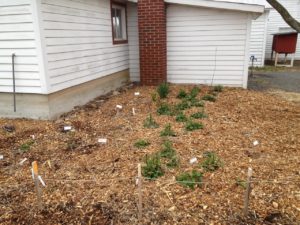 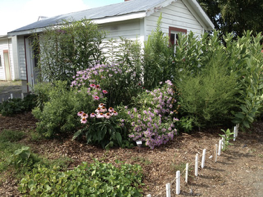 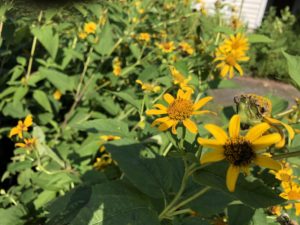 These photographs document the growth that made possible a dramatic increase in beneficial insects and their larvae in the garden: butterflies and moths (e.g., skippers, fritillaries, monarchs, cecropia moths) have been most prevalent.

The garden has not only attracted more flying visitors—it has encouraged a considerable increase in two-legged traffic as well. The pollinator garden has hosted Brownie and Scout troops, summer campers and school groups for presentations on the value of pollinators and the plants that host them, and a steady stream of park visitors now have an interesting destination right next to the historic farmhouse, and en route to the chickens.

In addition, at the park’s major events, FMN has hosted information tables which reached dozens of park visitors.  These tables were staffed by Marilyn Schroeder, Joe Gorney, Valerie Lamont, Barbara Whayne, and me.

Tending the garden—which I have done since inception—is a labor of love. I plan to not only keep it going, but to make it a service project of choice for the chapter (look for S109 if you’re a member). There’s still so much to do: more edging, pruning, planting, signage, weeding, formal certification by Audubon at Home, National Wildlife Federation, Xerces… And as my mother and grandmother always said, “Many hands make light work!”

Prince William – Balancing Natives and Ornamentals in Your Garden
Saturday, 23 February 2019, 1 – 3 pm
Old Historic Manassas Courthouse, Manassas
This lecture from the Master Gardeners of Prince William Education Committee discusses the benefits of native plants and features 25 specimen plants. The lecture is led by Keith Tomlinson of Meadowlark Botanical Gardens. This is a free program, but please register by calling 703-792-7747.