Behavior change has not yet been extensively incorporated into conservation practice planning, design, or overall thinking. This year’s Fuller Symposium, December 4, brings together a diverse array of experts from the behavior sciences to tackle how we can better integrate behavioral strategies and interventions into conservation practice to produce more effective outcomes for nature.

Attend in person at the National Geographic Society’s headquarters, or by by web streaming.

The conference is free and counts toward VMN continuing ed credits

You can attend in person or online. Register here

This year’s winner of the Nobel Prize for Economics, Richard Thaler, was recognized for his contributions to behavioral economics, a critical component in understanding how we make decisions about our health, wealth, etc. (Book recommendation: Nudge, with his coauthor, Cass Sunstein). Dan Ariely, one of the presenters at the symposium, is another prominent behavioral economist, and a regular contributor to the Wall Street Journal. (Book recommendation: Predictably Irrational.)

The Northern Virginia and Prince William Soil and Water Conservation Districts are proud to announce the first networking and team building event for certified volunteer stream monitors! Meet fellow certified monitors, discuss best practices with long-time volunteers and staff from the two Conservation Districts, and hear about new national-level stream initiatives from the Izaak Walton League, the coordinators of the Virginia Save Our Streams Program. For more information or to RSVP, please contact Dan Schwartz. Open only to volunteer monitors who have passed their certification test.

Join Walker Nature Center staff as they monitor Snakeden Branch in the forested parkland behind the Center. To RSVP and get directions, please fill out a Reston Volunteer Application and then sign up through the event calendar.

The Potowmack Chapter of the Virginia Native Plant Society

VNPS programs are free and open to the public. Space is limited on walks, so please register at https://vnps20171118.eventbrite.com

Join Margaret Chatham for a tour of the Trees of Fraser Preserve, Saturday, November 18, at 10 am. Some fifty species of trees have been recorded for Fraser Preserve. Come see how many of them we can spot with the help of turning colors, with the certainty of viewing the State Champion American Elm down by the river.
This will be a somewhat energetic hike, downhill and up several times. You might want to bring binoculars and a walking stick in addition to water and the usual dress for the weather.
Margaret is a devoted Fraser Preserve Volunteer Visitation Committee Member who removes invasive barberry shrubs in winter and wavy leaf basket grass in summer and knows the preserve intimately. She is also editor of the VNPS Potowmack News newsletter, a volunteer at the VNPS propagation beds at Green Spring Gardens in Alexandria, and an Arlington Regional Master Naturalist. 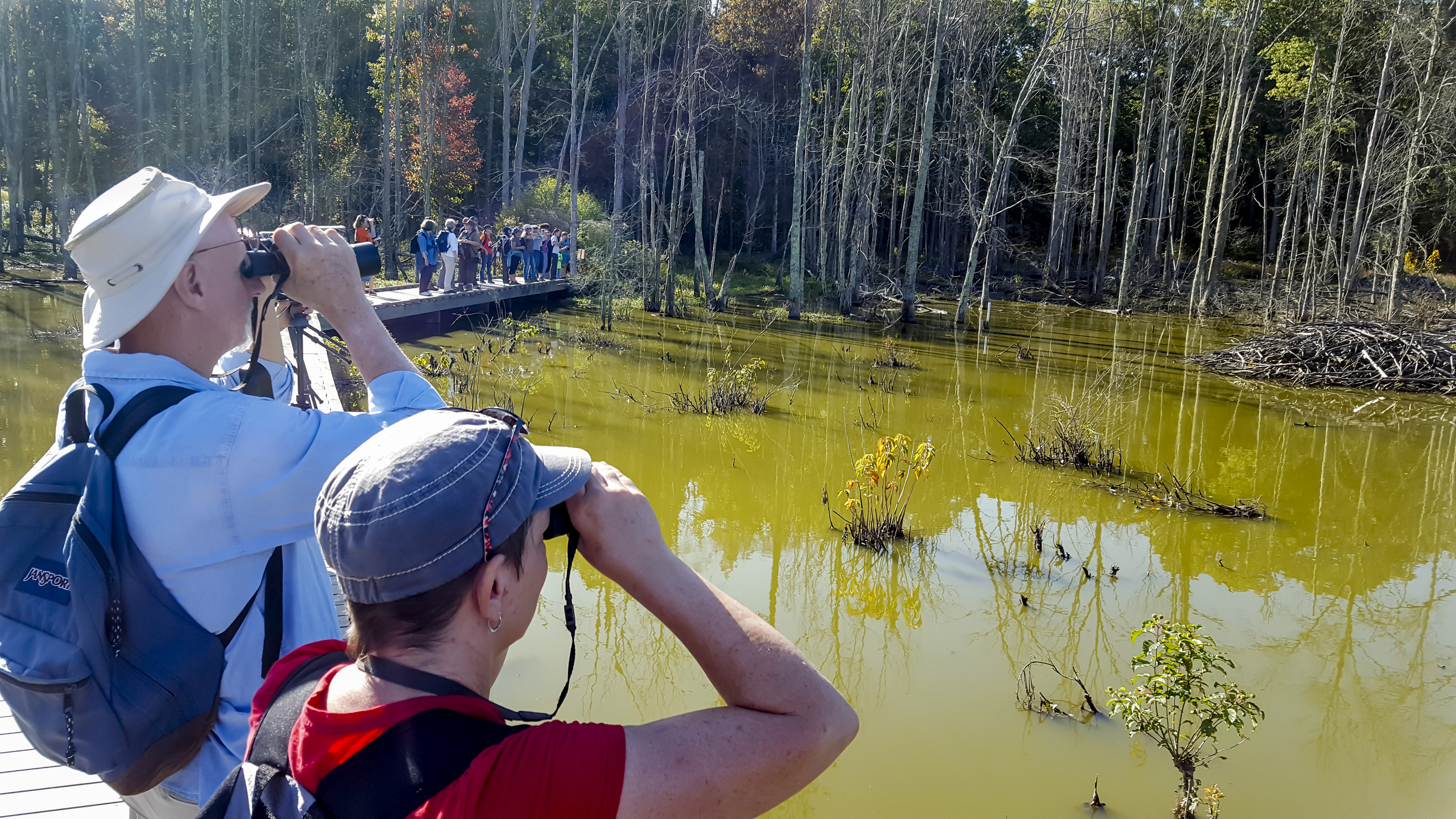 Huntley Meadows Park offered our gaggle of naturalists a perfect view of its 1,500 acres of wetlands, meadows, and forests for our second fall field trip, on 7 October. In the morning, Rentz Hilyer and Mary Benger directed our eyes skyward as we looked and listened for birds. Alonso Abugattas, Jr.’s afternoon herps walk kept us earthbound as we tried to spot the creatures that slither and swim. And wiggle. And sometimes just lollygag in the weeds.

Rentz, land steward specialist at the Northern Virginia Conservation Trust, and Mary, a graduate of the FMN program, helped us track the movements and calls of the more than 200 species of birds known to live in the park. As a group we observed 29 species of birds including Great Blue Herons, Hairy, Downy, Red-Bellied and Red-headed Woodpeckers, Great Egrets, Red-winged Blackbirds, Carolina Wrens and Chickadees, Northern Flickers, Mourning Doves, Wood Ducks, Canada Geese, Northern Rough-winged Swallows, Eastern Phoebes, Gray Catbirds, Yellow-rumped Warblers, Brown-headed Cowbirds, Belted Kingfishers, Blue Jays, American Robins and more. Rentz introduced us to the app eBird so that we can contribute to its ever-growing database as citizen scientists. 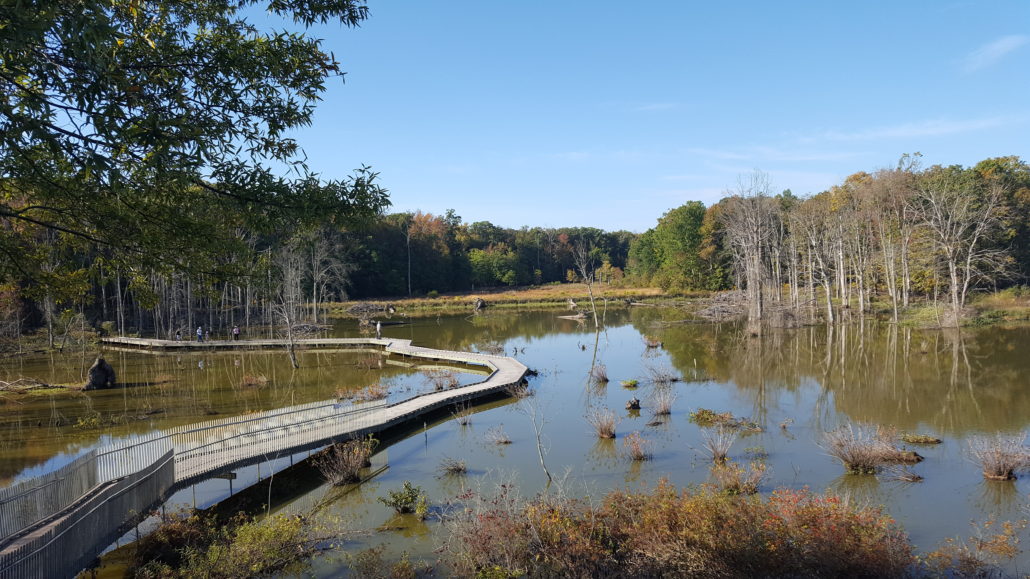 After lunch, we trekked back out into the park in search of herps with Alonso, the natural resources manager for the Arlington County Department of Parks and Recreation. With the recent drought, we weren’t sure how many critters we would find, but the beautiful day was good to us. We observed Eastern Ribbon and Eastern Garter Snakes; Snapping, Spotted, and Eastern Painted Turtles, as well as Southern Leopard, Pickerel and various other types of frogs. We learned that a group of frogs is called an army, and a group of toads is called a knot. Alonso has published a great resource called the The Reptiles and Amphibians of the Washington, DC Metropolitan Area and leads a Facebook group called Capital Naturalist, both of which are helpful to naturalists looking to identify the great diversity of life in Northern Virginia. 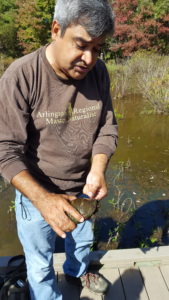 Alonso gives us a closer look at a painted turtle. (Photo by Ana Ka’ahanui)

In addition to animals, we observed all manner of plant species, such as Lizard’s Tail, Swamp Rose Mallow (a type of hibiscus), Winterberry, Arrowwood Vibernum and Wood Asters, to name a few. We learned that Jewelweed is a natural preventative and treatment for poison ivy and poison oak and that Turtlehead Flowers are a favorite treat of grazing deer.

Insects were plentiful, too, and some were vocal, such as the Handsome Meadow Katydid. The Long-jawed Orb Weaver spiders spun impressive webs at angles to best catch their prey. Common Whitetail Dragonflies and electric blue and red Damselflies whizzed over the wetlands as we wandered over the trails and boardwalk.  While we saw some evidence of the local beavers—lots of chew marks and piles of wood—they proved elusive that day. We did, however, see a lone muskrat cruising around in the marshes. The day was filled with nature discoveries galore and was a perfect learning lab for our Master Naturalist class.

Class photo on the observation deck 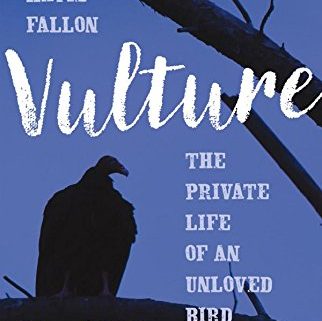 Just in time for Halloween!  Vultures are often overlooked, underappreciated, and unloved, despite the vital role they play healthy ecosystems. Worldwide, vultures are more likely to be threatened or endangered than any other group of raptor, but in the United States turkey and black vultures may be increasing in number. Based on Katie Fallon’s new book, this presentation will discuss the life and times of the noble turkey vulture, including its feeding, nesting, and roosting habits, migratory behaviors, and common misconceptions.

Katie Fallon is the author of Vulture: The Private Life of an Unloved Bird (2017) and, previously, Cerulean Blues: A Personal Search for a Vanishing Songbird (2011), which was a finalist for the Reed Award for Outstanding Writing on the Southern Environment. She is also the author of two books for children, Look, See the Bird! (June 2017) and Look, See the Farm! (forthcoming 2018). She is co-founder of the Avian Conservation Center of Appalachia, a nonprofit organization dedicated to conserving the region’s wild birds through research, education, and rehabilitation. Her first word was “bird.”

Free and open to the public.

The eighth annual RVA Environmental Film Festival (RVA EFF), to be held February 5-11, 2018, has started its planning. The week-long event will showcase films designed to raise awareness of environmental issues relative to all residents of our planet.  As part of it, the RVA EFF Committee is pleased to announce that the Sierra Club Falls of the James Group will once again sponsor the Virginia Film Contest and finance the contest prizes.  This is in addition to the SCFOJ’s continued RVA EFF founding sponsorship.  Other film contest sponsorships are still available for the RVA EFF.

All Virginia filmmakers are encouraged to submit entries. Submitted films should include environmental subjects in Virginia. Those subjects can include a wide range of topics – wildlife to human relationships, politics to development, parks to pollution. Outdoor recreation can also be a part of the environmental theme. Film entries can be fictional or nonfictional. All entries should incorporate at least some footage created in Virginia.

“The film contest has become a celebratory culmination of our festival and we look forward to including more and more Virginia filmmakers as the festival continues to grow,” said the RVA EFF’s main contest organizer, Scott Burger.

Submit your photos of Northern Virginia’s beautiful urban and rural places in the 4th Annual Nearby Nature Photography Competition, sponsored by the Northern Virginia Conservation Trust. Enter Today! Deadline is Tuesday, Oct. 31 at midnight. (Please note: Deadline has been extended!!)

The contest is open to all non-professional photographers, with prizes for adults in two categories:

There is a separate youth category (under 18) with prizes.